i played EE since 2001 for few years during it was supported but stopped to play for over 10years before 4-5 years i installed Save EE played some weeks and stopped to play again.

i can remember what grenwar is that siege and reli are forbidden and that i have to choose greenwar civ when i am in a greenwar match.
BUT i dont know what that saved civ`s are after installing SaveEE again.
Wich civ i have to choose when playing p2n for example?
can someone please explain me my whole civ list? 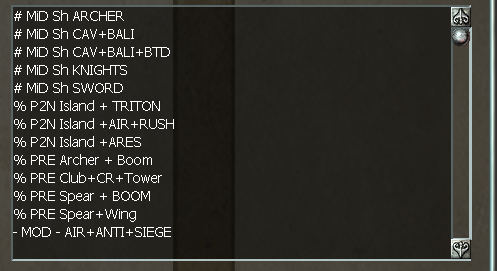 i can remember
MID Sh Archer is when playing middle age only with Archers and horses are forbidden?
but i didnt understand for example MiD sh cav+bali or p2n islan + TRITON etc. 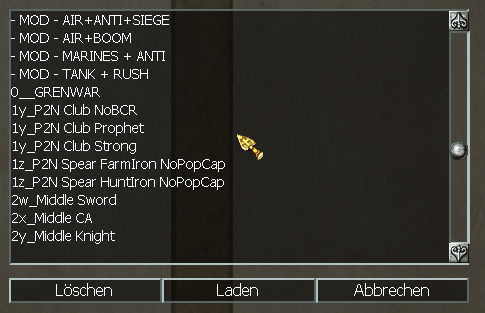 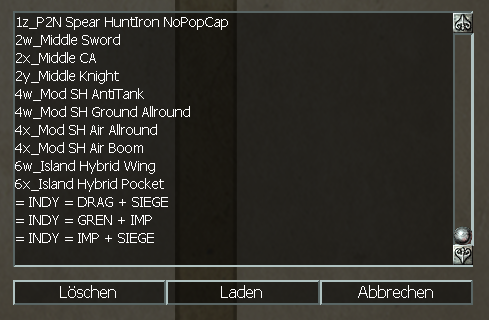 is there any civ explaining topic here on the Forum?
Top

Hi there, I'd be happy to help. So you seem to be misunderstanding this. You mention things not being allowed, these are not rules. These are preset custom picks for what bonuses you get.

When you say mid sh archers and horses are forbidden. That is not the case. That civ is for foot archers not cavalry archers (horses), but that does not mean they are forbidden. You could pick foot archers, and another player might pick a civ that is cavalry archers, and another player might pick swords. Anyone can pick what they want. But if you choose that civ, you should use those units because they will be stronger. After you pick a pre set saved civ you can look at what bonuses there are (or in game if you click the button at the top.)

When you say gren war that game mode is grenadiers only. You mention no seige or religion. That is not the case grenwar means you can only make grenadiers (and a hero, citizens etc just not other army units.) This game mode is fun because then it is very equal there is no countering units. You can't make other infantry like eliteguards or snipers that are better at killing grenadiers.

When you ask what civ to choose when playing p2n, that depends. The ones that say P2N islands are usually better for islands because you are isolated from opponents. If you are playing p2n on land you might want to go with PRE civs like archer boom for long games, or PRE clubs + CR (cost reduction) + tower for attacking quick.

You asked about specifically about a couple civs:

Mid sh cav+bali. Mid tells you that it is a civ that is good for games that are middle ages epoch (or ones close to middle ages).
sh means standard high resources, this civ will work for other resource types that is just a common game mode so the civ has it in the name
Cav = cavalry archers. These are common because they are fast so you can shoot arrows, run, then attack again.
Bali = balistas. These are seige weapons that launch a stone that has area of effect which can hurt many units at once.

This is a common combination. Some units have combinations people usually do because if you make only one unit, they can make a unit that counters it, but if you have a secondary unit that can counter those counters. For instance, foot archers are better than cavalry archers, but balistas kill archers easily and in mass. So if you have cavalry archers and your opponent has foot archers, you can start making more balistas to go with your troops and fight better. Similar combinations are longswords + trebuchets, knights + balistas, longbow foot archers and trebuchets.

P2N Islands + Triton. This is a civ that is good for pre to nano islands. But in addition it has bonuses for submarines. I think triton is the future version of trident submarines. Trident submarines are a VERY good unit (somewhat cheap really). It is a ballistic missile submarine with extremely long range. So a player can park them at sea and hit units/buildings on your land from very far away. They can only attack if they can see your units, so often a player might move a balloon or something over you then they can attack from extremely far. If they defend it at sea with anti aircraft boats and other boats they can be very difficult to attack or stop. One strategy for protecting from them is to build walls, as they block the missiles.

Happy to answer any other questions!
Top

thanks a lot for thet detailed answer really. i played few days ago. it was a pre game 4vs4 and one of my mates near me didnt make any army and he 'wrote i play boom u re wing u have to protect me'. So that means he was collecting ressources to age up fast to higher ages and then make better amry? and i was wing so i had to protect him? as summary. i didnt know what means boom wing or pocket

And whats it the diffrence between pre and p2n? at pre matches they also set nano age as the final age...and p2n mean pre historic to nano.
Top
Post Reply
3 posts • Page 1 of 1

Users browsing this forum: No registered users and 1 guest